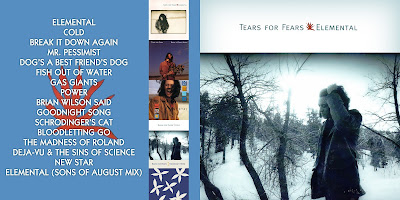 In 1993, I was so FREEKING SICK of "alternative" and "techno" and everything sounding the same.  Back then, with no internet or youtube or jamendo or amazon, most of you will remember that unless you knew exactly what you were getting, or you had heard it on the radio, purchasing new music was a game of Russian Roulette, luck of the draw.  I'm sure many of you were burned more than once, as I was, by purchasing an album that ended up being a real piece of shit back then.

Duran Duran's new album had just come out, as well as U2's Achtung Baby.  Old groups, new sounds.  So, when I saw the new TFF album amid this massive glut of psuedo-grunge wannabe shit discs, I had to get it.  I remember my wife, who was my girlfriend at the time, was with me, and we hadn't been together for very long.  So, her and I "discovered" this album together.

Maybe it sounded alternative, maybe it didn't.  Who's to say what alternative music was supposed to sound like?  All I knew was that there was a definite maturing of sound coming from Roland, and I was duly impressed.  His voice has NEVER ceased to amaze me.  Powerful, melodic, compassionate and strong.

The Cold single had a better cover than the album, so I switched that out.  Also, the A-Side/B-Side on the CD blended to well, sounded perfect.  So, despite the fact that Goodnight Song is obviously a "last song of the album", I had to plug in the b-sides at the end.

Speaking of Goodnight Song, it wraps WAY TOO SOON.  They should've/could've continued jamming for 8-10 more minutes, with a slow fade.  That would've sounded so much better, so much more appropriate...

Email ThisBlogThis!Share to TwitterShare to FacebookShare to Pinterest
Labels: 1993, Elemental, Tears For Fears