Madchester - The Best and the Worst of British Rock & Roll 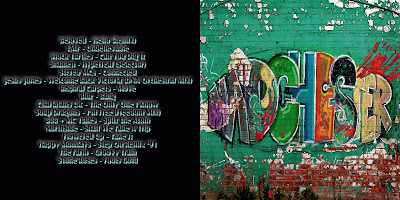 It's best that when describing Madchester, I let someone else do it.  At the time, I was exiting High School and entering College in the mid-western United States.  I was still young, and as far away from the "Happening Scenes" as you can imagine.  With no internet or effective informational network to help with what was happening NOW, all I could do was watch MTV, listen to the radio, talk with the Record Store employees and shuffle through a handful of music magazines that described what HAD happened, rather than what was happening.

The music that I was exposed to at the time did help a lot, but it was a distorted view of reality by the time it got to me.  This mix tape compilation of some of my favorite "Madchester songs" does include that, but there is obviously some materiel in there that a Brit who grew up with Madchester would decry as NOT.  So, for you British folk reading this, what you see is what the hip kids of the time in middle America perceived as "Madchester".

I've made a comprehensive collection of the best of Madchester Music that came out to over seven discs of materiel.  Needless to say, it gets incredibly dull, incredibly fast.  Madchester sound created a lot of diverse musical genres that still exist today.  Without Madchester (and Post Punk for that matter,) I'd venture to say we wouldn't have Techno/Electronica, Indie Britpop, Britrock in it's current form, and modern Psychedelia.

Madchester gave us some WONDERFUL bands and FANTASTIC songs.  I have more than half a dozen Madchester bands in my top 100 bands of all time.  Songs from the era are used constantly now in commercials and promo pieces, and the bands of the era are now enjoying popular reunions that I love hearing about and seeing.

I feel that the only drags on the entire Madchester scene is primarily the drug culture that evolved, which in turn has created an entire dependent class that has destroyed not just the users lives, but also the lives of the children involuntarily bound by it.  Also, I feel that the music was and is as formulaic and dated as the likes of Disco Music from the 70s.  I like the music, but only for limited amounts at a time, and I think that's more for nostalgia than anything.

Maybe some of you will like this little mix, maybe not.  It's fun for the summer, which is on it's way.  Put it on, and see if anyone can remember half of them....

Madchester Mix
Posted by Unknown at 8:47 AM

Email ThisBlogThis!Share to TwitterShare to FacebookShare to Pinterest
Labels: Madchester