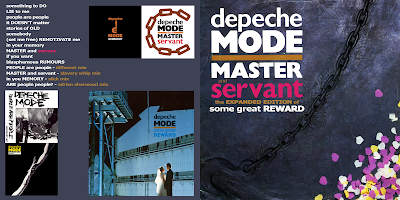 In 1984 I had no idea who Depeche Mode was.  Not a clue.  I was too busy listening to Duran Duran, Michael Jackson and Footloose to know who Depeche Mode was.  But, in 1984, Depeche Mode released Some Great Reward, a delicate balance of Post Punk and Synth Pop that did spawn at least one single that I remember from the time, People Are People.  I didn't hear this album until 1989.

I have often tried to rank these early Depeche Mode albums to see which ones were better than others.  But, it's hard.  Hell, in the nineties and into the new millennium it's easy to rank, as most of them were crap.  Starting with the luke warm psuedo industrial Songs of Faith & Devotion, the albums went down hill from there.  But, each of the eighties albums were different.  They each have their own cohesive sound that differentiates them from each other.  Compare a track from Some Great Reward to a track from Black Celebration to a track from Music for the Masses.  They all sound uniquely different.  Therefore, it makes them impossible to grade against each other.  They each have their own pluses and minuses.

I absolutely LOVE the picture sleeve for Master & Servant.  The balance of color and the chain and the hearts.  Even the typography.  It all pulled together to make a perfect cover.

I dropped the b-sides between the two "sides" and finished the album with the better of the mixes.  And, it all looks like something that could've/should've been officially released.

As for the demo/unreleased tracks, I know that there is an Alan Wilder demo tape out there with 4 tracks on it.  I used to have a bootleg with two of the tracks on it, and I've heard the other two, but all four of the songs lack the type of structure and recording quality that the rest of the album has.  To include ANY of them as part of the album would seem odd and out of place.  If you really want to hear them, go look them up on Youtube.