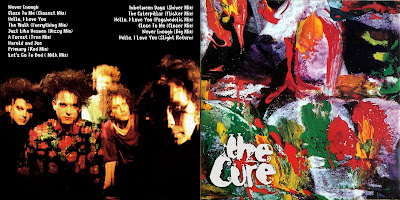 The height of my Cure love came about the time of Never Enough and Mixed Up.  We just had the spectacular Disintegration with a host of b-sides and remixes, so a new song and a promise of a remix album, and I was taken.

Bad thing is, half of Mixed Up wasn't new.  I had the singles from Disintegration, so all of those mixes, I considered old.  I had the new Never Enough single, and that mix was on there too. Wha?  Come on, now.  I was promised a disc of new mixes!  New to who?  Not your diehard Cure fan.

So, I bought the singles they released, and the album with some new material on it.  And, I looked, and low and behold, there was quite a bit of new stuff there!  Throw Harold & Joe in there, right down the middle, and Rubyait's Hello, I Love You, and technically, there was enough material to actually consider a new album.

I didn't actually consider it finished until I got the Psychedelic Mix of Hello I Love You, and it made it complete.

Enjoy.  This is what Mixed Up SHOULD'VE BEEN IN THE FIRST PLACE.

Email ThisBlogThis!Share to TwitterShare to FacebookShare to Pinterest
Labels: 1990, Cure, Mixed Up