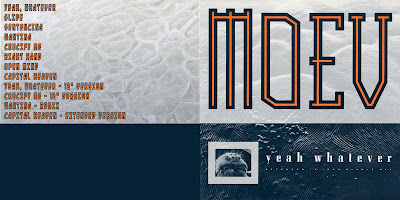 So, after the Puppy, I'm throwing on a little more proto-industrial/synthwave/Darkwave/Gothic from a nice little band named MOEV.  I like most of their stuff, rather Post Punkish, unobtrusive and somewhat forgettable.  But, still, very well written and impressive.  It's solid and quality, just not groundbreaking or bold.

For some reason I tend to like the Single Sleeves of most bands more than the actual album sleeve, wonder why?  Anyway, I used the single sleeve, and mixed the album just as released, except I added the remixes.

Email ThisBlogThis!Share to TwitterShare to FacebookShare to Pinterest
Labels: 1988, Moev, Yeah Whatever