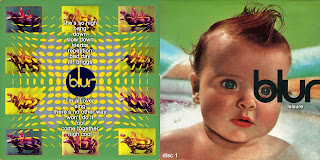 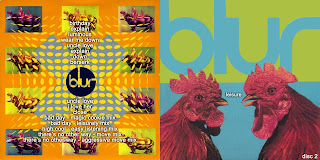 I've heard that Damon and Graham weren't particularly proud of this first official album.  I don't know why.  I remember picking up the There's No Other Way CD single from a music store called Pickles, and being rather impressed.  It seemed that almost everything I picked up from the Food label was pretty sweet.

Don't know if you would call this Madchester.  Is it "alternative"?  Is it Britpop or Britrock?  What would you call it?  I know that there are quite a few people from Great Britain who check out this site.  What did the British consider it when it came out?  Just Rock n Roll?  Whatever it is, it's attractive and addictive and fun to sing along with.

Obviously used the first two 7-inch single picture sleeves for the covers.  Much more fantastic than that stupid broad in the swimming cap.  Also, sort of jumbled the tracks around a bit, threw in a lot of bonus material from the deluxe set, got some great mixes, and ta-da!  A great collection and rather cohesive arrangement that makes the album itself incredible to listen to.

I had trouble uploading these two.  Let me know if they don't work...