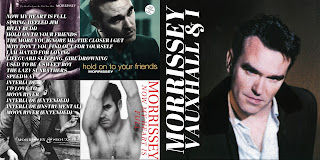 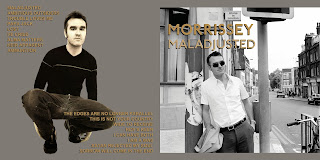 So, if I was starting this blog posting my FAVORITE albums by my favorite artists, I probably wouldn't be posting these two, for Morrissey.  I've always had a special place in my heart for Bona Drag, since it first came out.  But, since it's been "remastered" "remixed" "re-released with bonus tracks", I haven't been able to go through the album again and rearrange it.  As you all know, Bona Drag was a collection of Morrissey's singles up to that point, with b-sides and all.  Well, lovely, that's right up my alley!  Now, though, there are a bunch of new tracks that I'm still not familiar enough with to make a final track order.

BUT, when these two were remastered, there wasn't much new that I didn't already have, so they were both easily completed.

Two very solid, yet easily forgettable Morrissey albums.  Don't get me wrong, I love them both, but there's nothing on these two that really make the stand out.

Of course, Vauxhall & I is Morrissey's American alternative break out album, released just when alternative music became mainstream in the US.  The More You Ignore Me became the alternative radio go-to for Morrissey, sandwiched right in between Matthew Sweet's "Baby We're the Same" and Spin Doctors "Little Miss Can't Be Wrong".  So, you can see how this album can easily be sullied simply by association with the music it was surrounded with....

Maladjusted was another story, though.  When this album came out, I was troubleshooting Boston Market restaurants in Des Moines and Ames Iowa.  We were seeing a shrinking of record labels.  Alternative music in the US was dying slowly whilke the music scene becoming more and more saturated with boy bands, "Electronica", R&B and "Industrial Metal".  A brief look at the remaining big alternative acts sees an aging population of artists beginning to reveal that they may have maxed out their creativity.  New Order had broken up, Depeche Mode had become an industrial band, Cure had one decent song off of their Mood Swings album, and even that was a pop hook giveaway.  Underworld was big, Chemical Brothers was bigger, Orbital was freeking HUGE, and Prodigy was, well, they were trying too.

Anyway, Maladjusted appeared without any fanfare, and was rumored to be Morrissey's last.  It had a harder, rawer edge than most of his other material, and it seemed as if it would be a fitting exit.  My wife and I got together with another couple that we enjoyed doing things with, let's say their names were "Tim and Robin".  Anyway, we got together with Tim and Robin to go to Lawrence Kansas to see Morrissey play at this little venue there in college town.  It was open seating (actually standing), and only accommodated 500-700 people TOPS.  We weren't right up in front, but we were close enough to see Morrissey sweat.  And it was a GOOD THING.  Anyway, we were just getting into the groove, when he wraps it up.  We look at each other, and we were like "Is this intermission?" Only 45-50 minutes.  Not even an hour.  I mean, there wasn't even an encore! Yeah, we heard "Shoplifters of the World", and Interesting Drug, but you'd think he'd play for more than that!  We go outside and wait by his bus, with the rest of the crowd.  Someone shouts a distraction, and suddenly I see his head duck into the bus door and he was gone.

Since that time, I've seen plenty of live performances online or whatnot, but that was my only "live" live performance.  Meh, maybe I was a little disappointed, but I DID get to see him.  And, that's all that matters.