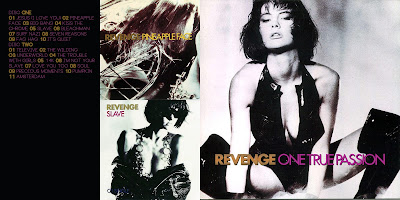 SO, this here is the original front exterior cover.  My wife never did like this cover, I wonder why?  I stuck with the cover because despite my feelings and her feelings over it, it best expresses the music that lay within.

People may not have the best reviews for this album, but I really really liked it.  I see things like "tedious" and "inconsequential" and "mediocre".  I find it far from that.  I understand that it IS the darker side of New Order, and leaned heavier on the gothic/industrial edge, but I think that was of more relevance at the time than Electronic or the Other Two.

The synth is heavy.  Yes, Hooky's bass gets lost.  The song titles are weird and the melodies are thin.  But, I feel a lot of the energy and depth that you find in those early New Order albums.  He focuses it like a freeking laser and pulls out what I think could be considered the last great New Order album.

Therefore, the cover truly reflects the feel of the music within.  It is sensual, dark, powerful, and NOT gentle.  Don't expect it to be.

Revenge released the one album, and two EPs, along with 2 singles in a variety of formats.  The material to pull from was voluminous as it is, but then they released One True Passion 2.0 with more material.  What sucks, is 2.0 didn't even include the tracks from the original album as it was.  So, you still have to have 1.0 to get it all.  They also claimed that the material from the second EP, which was released 2 years later, was supposed to be from the same batch of sessions.  No way.  They don't even sound the same.  So, I've pulled those out all together.

So, in my version of OTP, I included track one from the very first EP, and then the entire original CD release of the album as "Disc One"  Disc Two has all of the B-sides and unreleased tracks from the same sessions.  I could've plugged some remixes in there, but I have enough that I want to plan a later disc of just mixes.  Sorry!

Anyway, turn it up loud, loud as you can handle it, and ENJOY.