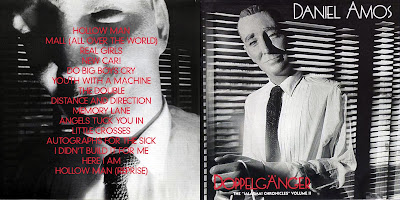 I went through a phase in the eighties where I listened to a lot of Christian Rock.  It was mainly because my parents had been told at church by other parents from other parents that Rock & Roll was going to send us all to hell.  And the only thing we could do now was to listen to Christian Rock.  I still think it was a marketing gimic.

Regardless, there were some great tunes that came out of it all.  One of the 4 or 5 Christian bands I will still listen to, Daniel Amos was introduced to me by a childhood friend that came to visit one summer in Chicago.  I got this one, and also Volume III - Vox Humana.  These two albums still get pulled out every other month, to this day, for a spin.  Funny, quirky, new wavy, but POWERFUL.  And, not in an overbearing preachy sorta way.  It's hard to put a finger on it.  It's REAL in a SURREAL way.

The album starts sounding really good about "Do Big Boys Cry", and by the time you get to "Little Crosses", you're ripping it up.  The best song?  There isn't one.  I'd say the middle 7.  It's one big story, it's not like you can just listen to one or two tracks, and you sure as hell can't put it on shuffle.  It's like Floyd, Beatles, the Buggles and Billy Graham all mixed up into one.  Don't believe me?  You tell me what it sounds like, then.

Loooooong out of print.  There are no b-sides.  There are no demos.  Only one cover that I know of.  Were there even any singles?  Don't know.  Doesn't need em.

If you like power pop/new wave/early 80s pop, you will like this album.  Let me know what you think.