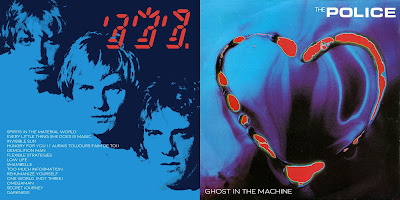 An album I wouldn't normally have considered for a while, here, Ghost In the Machine was requested and I am happy to oblige.

I have no interesting back story to Ghost In the Machine, as it was one of those albums I purchased later in life to finish filling my Police back catalog.

As for the music -

They only released 3 b-sides that were not on the album, surprisingly enough.  They had no official remixes, and I have yet to find a fan remix that is worth a shit.

The interesting thing about Ghost, though, is the demos.  Ghost actually has a full album plus extra of demo material.  Rumor has it, Sting had recorded the entire album, plus five or six extra songs, as a demo.  He played all the instruments and sang all the vocals and taped it.  He then handed the tape to the other two guys and said "Here's our album, do you think you guys can play this?"  The result was the Ghost album, and 5or 6 of the demos never saw the light of day.

Now, I have the demos.  The extra songs aren't bad, but the recording quality is worthlessly bad.  You might listen to them to simply have heard them, studying them as an anomaly.  Maybe, as a collector, you are into that piss-poor muffled crap demo recording quality.  Not me.  Sorry.

When it comes to demo material, in situations like this, and in all future instances, I will only include demos in my album track listing if the production quality is equal to the commercially released album tracks, or if it's not noticeable.

As for the album cover, I've never liked the original, as it was boring, and I always loved the "Every Little Thing She Does Is Magic" picture sleeve.  That picture sleeve is in my top 100 picture sleeves of all time.  So, I mix it up a bit, and maybe it works, maybe it doesn't, but it's a cool cover and unique on my CD shelf...

Email ThisBlogThis!Share to TwitterShare to FacebookShare to Pinterest
Labels: 1981, Ghost In the Machine, Police