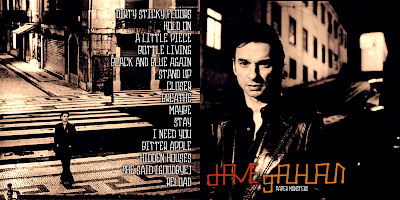 After Exciter, I pretty much gave up on Depeche Mode.  They sounded tired and trying way too hard.  It just wasn't working anymore.  So, when I saw this album along with Gore's second solo album, I thought they had decided the same thing.  Needless to say, they've had three more albums since then, of which only one was even halfway good.

But, after listening to this one two or three times, I think he did a pretty good job.  Songs that you can sing along with, they keep you listening, none of them would get skipped.  You could definitely tell that Gore wasn't writing any of the tracks, they were of their own sound, despite having Gahan's vocals.  The only tracks that really stood out for me were I Need You and Bitter Apple.  But, for you completists, here you go...

I've put all of the b-sides on, intermingled with the album tracks toward the middle of the album.  I've also included Reload, which was a guest vocal by Gahan on a JunkieXL song that came out at the same time.  The Junkie XL track kicks more ass than the rest of the album, unfortunately.

Never liked the cover as that stupid Paper Monsters logo looked like shit.  Simply used some Corbin photos from the same sessions, and changed up the font.  Looks good.