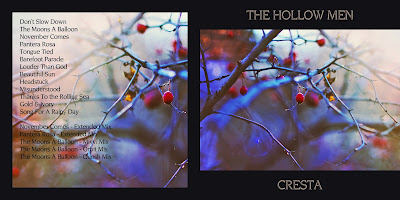 I've often heard this album referred to as "the greatest britrock album never heard", and I can totally get it.  When it was released, it got absolutely no coverage, no airplay and no support.  I heard "Don't Slow Down" once on the radio sandwiched between Matthew Sweet's "Girlfriend" and the Railway Children's "It's Heaven" and that was it.  Goes to show how little it was played, as I can remember the ONE time I heard it and the songs before and after.

It's hard to classify this one, really.  It could be post punk, it could be jangle pop, it could be a tad madchester.  It's all of them, and a little of none of them.  The first five songs really bring it out and keep you listening.  Regardless of what the rest of the album sounds like, you'll know this is a keeper just on the strength of the opener.  But, although the last half of the album does slow down and weaken, it still holds its own.  Best song on the album is Beautiful Sun, and that's third from last.

The last three tracks are the b-sides.  Nothing really of note, just there for completion's sake.  The five mixes are pretty good, and nice to have so you can make your own mix tapes.

The original cover of the album really, really sucks.  It's dull, uncreative and boring.  You don't even feel compelled to look at it (maybe that's why no one picked up the album).  SO, I completely remade the cover.  I took a stock pic off the internet, and now you have a tasty little cover to look at while you listen.