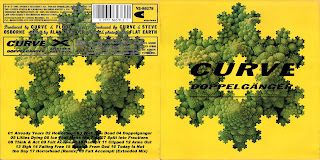 1991 was the year after High School, and my first year in College.  Lonely, afraid and wondering what the hell I was planning on doing with my life, I completely immersed myself in music.

1991 was good in the fact that New Wave had petered out, and Post Punk was actually mainstream.  Grunge was beginning to take hold in the US, and in Europe, Madchester was the rage, as well as Shoegaze, the British version of Grunge.

If Shoegaze had gone mainstream, it would've been lead by the likes of Curve.  Doppelganger, their first full length album followed 4 brilliant EPs.  The album and it's associated singles sounded like a mix of Grunge and Proto-Techno with a hint of Manchester Sound.  Layer Toni Halliday's voice over the top, and you have a lush (sic) and gorgeous album that can easily stay in your player for days without tiring.

I hated the original album cover, so I used the graphics from the Fait Accompli single from the album.  I then attached all of the b-sides on the end of the album, along with the mix of Horrorhead and the extended mix of Fait.