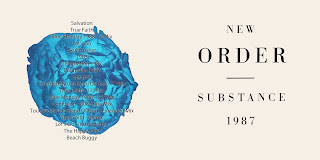 In late 1986, and into 1987, I truly started to discover music.  Yes, yes, I had always loved my Duran Duran, and kept buying my random 45rpms, and taping songs off the radio as the DJs played them.  But, I never really heard it.  Yes, I listened, but it wasn't until 1987, that I HEARD.

One of the first bands that essentially introduced me to Post Punk music was New Order.  I started with their "Substance 1987" album, which was a hodge podge of singles that were never released on albums during their career.  Although they were all tracked in chronological order, some of the tracks were re-recorded in 1987, some of them actually were on albums, some were extended versions while some were not.  Some tracks were edited for length, simply to fit on the CD.  So, yes, a nightmare "record label" greatest hits.

While releasing this double CD album, they had also released 3 other singles simultaneously that were not on the album.  They recorded a soundtrack for a movie called Salvation.  They had several filler bits of instrumental music for their Substance video tape of music videos.  They had a megamix of songs from the album, and also a song recorded during this time, that was never released.

For MY VERSION of New Order - "Substance 1987", I only included materiel recorded and released during 1987 and 1988.  I included all the bits and pieces that I mentioned earlier, and all of the singles that were released at the same time as this.  All of the old materiel was relegated to the albums of the same time periods (of which I will post eventually).  This is a VERY DIFFERENT idea of what Substance was, but I feel that it actually is more of a collective for that time period.

And, it eliminates that stupid "greatest hits" tag that I hate so much.
New Order - Substance 1987
Posted by Unknown at 8:55 PM