Out Come the Freaks 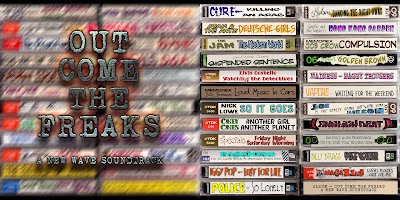 I've been interested in listening to true New Wave music of late, and thought I'd share some of my favorite, and more well known tracks of New Wave.  I only vaguely remember some of these songs in between my Micheal Jackson and Dolly Parton and Pink Floyd and the Eagles.  Not that any of that music is bad, it's just that New Wave was just that, NEW.  It was popping up in little bursts of creative energy, made by young people tired of that old, boring, worn out sound of the seventies.  It was time to move forward.

A lot of people have heard of the term "New Wave Music", and it conjures images of Duran Duran, Flock of Seagulls, Culture Club and Thompson Twins.  Unfortunately, this is a popular misconception.  The aforementioned bands are considered New Romantic, which is an off-shoot of New Wave.  I'll talk about the New Romantics in a different post.

New wave music is a musical genre of pop/rock created in the late 1970s to mid-1980s with ties to 1970s punk rock.[14] The wide range of bands categorized under this term has been a source of much confusion and controversy. The new wave sound of the late 1970s moved away from the smooth blues and rock & roll sounds to create music with a twitchy, agitated feel, choppy rhythm guitars and fast tempos. Initially—as with the later post-punk—new wave was broadly analogous to punk rock before branching as a distinctly identified genre, incorporating electronic and experimental music, mod, disco and pop. It subsequently engendered subgenres and fusions, including ska, power pop, synthpop, college rock and gothic rock.

I've attached a link to a "Mix Tape" I collected of some of my favorite New Wave songs.  Just click this link below...

Out Come the Freaks

and hit the download button.  You will have to be able to unzip the file, so make sure you have WinZip or WinRar.  Also, none of the tracks are encoded properly, so although you can burn them onto a CD with no problem, or even listen to them on your computer, you may have problems loading them on your iPod or Mp3 players and being able to listen to them in order, and tell which track is which.

I've designed a CD cover to go along with it, so if you're old-school like me and want to burn off a CD, then just print off the cover, fold it in half, and slide it into the tray.

All future music links will be handled the same way.  So, keep this in mind.

I hope you enjoy the mix, it's a fun one.  For those of you my age, it should bring back some great memories of pre-teen adolescence and freedom....  Love it.
Posted by Unknown at 2:33 PM