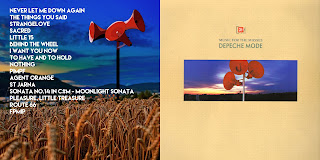 As I mentioned in my last post, 1987 was a very special year for me musically, as I started to really listen to and explore the music that I introduced into my life.  Along with New Order, I also started listening to Depeche Mode.  I was also heavily influenced by the Cure's Kiss Me 3 album, but that's for another post.

My version of Depeche Mode's Music For the Masses is pretty straight forward.  I eliminated all of the remixes, with the exception of Fpmip (which really isn't a remix, per se).  I then added all of the B-sides to the singles, in order, after the album tracks.  Yes, this arrangement makes for a somewhat boring end, with the exception of Pleasure Little Treasure, but I couldn't bear to chop up the album itself to insert the b-sides.  The album itself is a masterpiece.
Depeche Mode - Music For the Masses - 1987
Posted by Unknown at 9:17 PM