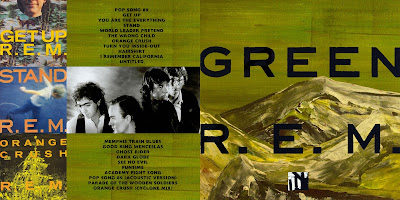 Just so you know, I listen to American music, too.  Just not as much.  There's a few really good ones out there that I'll eventually publish (like the four disc version of Smashing Pumpkins' "Melancholy").

This came out my junior year in high school, and was all over the radio.  It's a great album, very radio friendly, and intelligent.  Fortunately, when this came out, I wasn't too political, yet, otherwise I may have had problems with it.  As it was, I listened to this one quite a bit, even got my Dad listening to it, and that's a feat.

REM has always had a crap load of bonus material when it releases albums.  This one was no different.  Also, the quality of the bonus material on Green was exceptional.  Sometimes, the bonus material is worthless.  Not here.  What some REM fans may like about this collection is the ultra-rare Cyclone mix of Orange Crush.  Why is it so rare?  It's a fan mix and was never released, but it's a fantastic mix, so I had to include it.  Again, arrangement on this, due to the cohesiveness of the album, was to dump all the bonus material at the end.

As for the covers, I always loved the picture sleeves from the singles.  So, that's what you get!