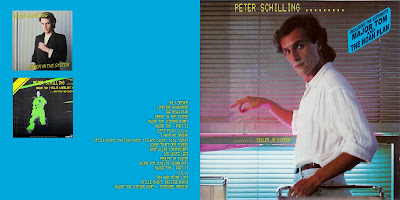 The second 45rpm single I ever purchased was Peter Schilling's Major Tom.  English on side A, German on side B.  I was 11 years old in 6th grade.  Played that with Break My Stride and Oh, Mickey.

So, is the is Power Pop or New Wave?  I feel it's a little of both, sliding in there with other German acts like Nena and Falco.  It's definitely held the test of time, even though Major Tom has slid into that "nostalgic" slot.  The Noah Plan is probably my favorite, although every song is strong.

I've got the English version, the German version, and the extended remix of Major Tom.  Everyone should like, if not to simply bulk up your new wave library.

Email ThisBlogThis!Share to TwitterShare to FacebookShare to Pinterest
Labels: 1983, Error In the System, Peter Schilling