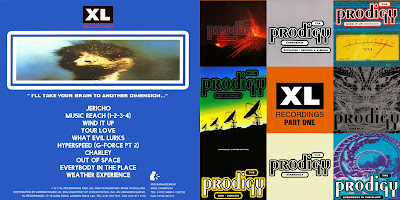 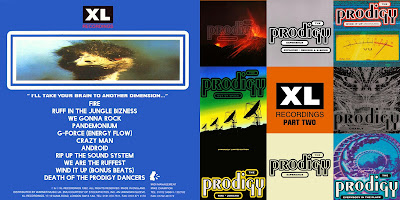 I've often thought this album was like pancakes.  They start out fantastic, but by the time you get done, your fucking sick of them.

A nostalgic, dated piece of early techno, this was my first experience with Prodigy as I heard Everybody In the Place on XL Chapter 3.  Holy cow!  This Techno music was good!

I still like some of that early stuff, especially his album, in measured doses.  You can never listen to the entire thing all the way through, though.  Good thing about Prodigy, fortunately, is they got better with each progressive album.  I think they are still relevant to electronic music today.

Cool thing is, I think I have all of the b-sides, which in some cases were better than the album tracks.  I obviously didn't include any mixes.  I may make a disc of those, I may not.  We'll see.

Good luck on this one.