Late At Night, winding down of a century... 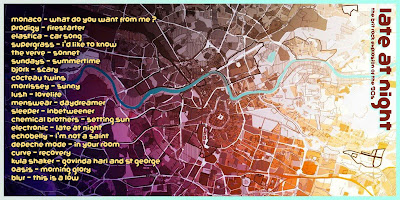 By the mid to late nineties, a lot of the music coming from England began to coalesce under a spectacular banner called Britrock.  Maybe it was always there, maybe it never was, it's what I saw, though, and it stuck.  Young bands from the early nineties had matured into seasoned performers, and the seasoned performers from the previous decade were now elder statesmen as strong as any of the others on stage.


This is a mix for the summertime (sic) no doubt.  And every song sounds good in the car LATE AT NIGHT, with the windows down and wind blowing through the night.

I've aptly named this disc "Late At Night" as this is definitely the twilight of a lot of the groups on here.  By the time 2000 rolled around, ten of these groups were gone.  The seniors in the group just barely survived, and were never ever the same again.  An entirely new generation of British superstars were just around the corner. They all really closed out the 20th Century in style, though.

Again, another disc that has a home in the sun visor in my car...

Late At Night
Posted by Unknown at 7:05 PM