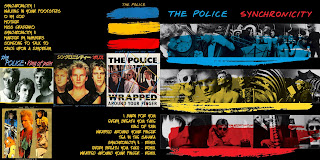 One of my top ten bands of all time, their best album, and also one of my top five bands I would have liked to see live during their prime time, this case, summer of 1983.

I was only twelve when this album came out, and I remember songs from this specifically as I was moving to Chicago.  Moving from a small midwest town to a large booming metropolis was staggering to my senses, and a bunch of materiel from 1983 and 1984 stuck heavy with me in good and bad ways.  This was one of the best.

I was introduced to the album as a cassette, so it was easy to break the album into two different "Acts", One and Two.  Between the two sides, I placed all of the b-sides, in an attempt to create Act Three, or a Side C to an already great album.  I didn't want to put all of the b-sides at the end of the two, as Side Two, or Act Two was already an excellent ending.

I plugged a few remixes of the hits and a couple fanmade mixes as well, after the end of the album, to fill the rest of the CD.

To me, still, the best song is Synchronicity II.  Always has been, always will be.  A definite power pop hit if I ever knew one....