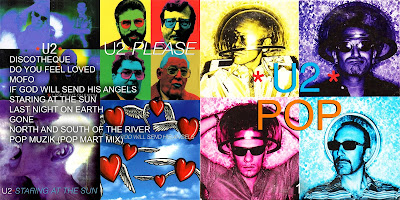 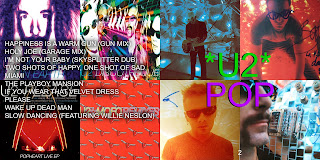 I will admit, I haven't been the biggest U2 fan in the new millennium.  They have their moments, and I tend to stick with their hits. But, when they recreated themselves in the 90s, I was their biggest fan. Achtung, Zooropa, Pop.  I loved them all. (Okay, Passengers was alright, but a little weird.)

I liked Pop a lot because of the electronica at the time.  But, as time has passed, the electronica has become dated, but the songwriting is classic and legend.  Every album track is a masterpiece.  Best ones are If God Would, Staring Sun, Last Night, Gone, and Wake Up.  The b-sides aren't bad.  I like the Sinead O'Connor duet, the Willie Nelson duet, and their supercharged version of Pop Muzik (When the build up breaks into music, it's like an adrenaline rush.)

When this album came out, I was managing a restaurant chain and worked with my wife and a large group of our friends (who we still talk to today, thanks to Facebook.)  We'd go dancing at a club called Bricktop, then 1421, and we'd have a blast.  I tie this album to that time in my life (Along with Wild Mood Swings) as a fantastic period of freedom and fun.  I'll always remember this album fondly....

I mixed it up a bit, b-sides here and there, but I got them all.  I left the Skysplitter Dub of I'm Not Your Baby on here, rather than the regular release, as the mix seemed to fit the overall feel of the album better.  When I go to release my mix disc of this album, I'll put the original on that.

Goodbye
It's emotional
Goodnight
I'll be up with the sun
Are you still holding on
I'm not coming down....

Email ThisBlogThis!Share to TwitterShare to FacebookShare to Pinterest
Labels: 1997, POP, U2