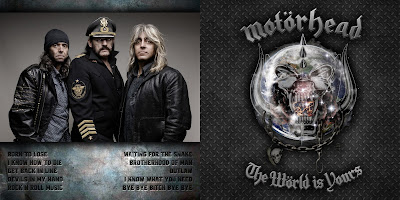 I've waited a while for this one.  I knew if I posted it right off the bat, it might scare some people away.  But, I think that you all can tell by the material I've posted, what I'm capable of.  So, just trust me on this one.

I've always loved Lemmy, ever since I first saw him on the Young Ones singing Ace Of Spades.  He held true to his image and style, and his music simply got better over time.  This one, released when he was in his late 60s (!!!!) happens to be one of my favorites.

You could call Motorhead a "British alternative to Metal".  It's Heavy Metal, but it's nothing like American Heavy Metal.  It is distinctive.  While everyone is trying to sound like James Hetfield, Lemmy sounds the same, that growl, ripping voice that tears through flesh.

The only thing I DIDN'T like about the album was the cover.  In fact, I don't like most of Motorhead's covers.  It's because they all have that horned demon dog thing on a solid black background.  I took this cover and dropped an industrial steel texture in the back, a group shot for the back, and dig the typeface for the songs - I made it look like they were stamped/chiseled into the metal.  Yeah.  And those three dudes are the baddest sons-a-bitches I ever seen.  They look like they could beat some ass right now.  Gotta love them!

As for the tracks - same order, no b-sides, nothing.  Just the album.  All that's needed.  Best tracks are Born To Lose, Get Back In Line and Outlaw.  All of them will scare your mother, though.

Email ThisBlogThis!Share to TwitterShare to FacebookShare to Pinterest
Labels: 2011, Motorhead, The World Is Yours