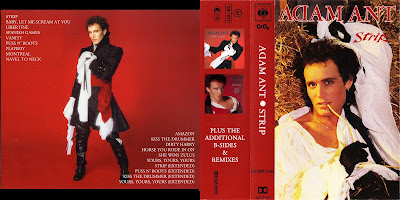 Adam Ant - Quintessential New Wave music.  Yes, I preferred him with the Ants, but solo works too.  Punk had died, and he was no where near a New Romantic.  Yes, pure New Wave.  I always liked this album because it was some nice pop flare, but still held true to Ant's roots. He wouldn't lose those until Room at the Top.

All the covers were boring, so I took the cassette cover and dressed it up a bit.  Yes, it's a little busy and disjointed, but the fact that it's from a cassette really captures the 80s feel.

As for the tracks, we have album, b-sides, then remixes.  Listen Up.