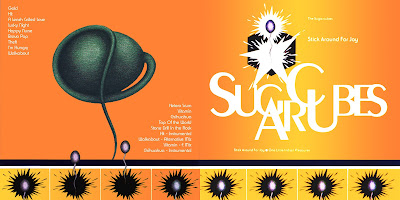 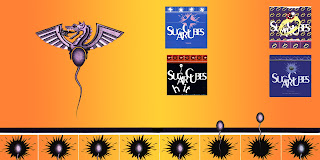 Two covers again on this one. Print one side,  flip it over, and print the other side.  I couldn't decide the best way to do it with Just the single cover.  I think they both look pretty sweet.  B-sides all included, but no mixes, as I'm saving those for It's It.

Anyway, this album came out at the end of my freshman year, or beginning of my sophomore year in college.  But, I didn't start listening to Sugarcubes until It's It.  It's It is plug full of fabulous remixes (will post that at a later date, as there are dozens of hidden mixes released across a variety of media to consolidate.)  So, I got that, and felt that I HAD to go back and get the original albums.  Of the three albums, Stick Around For Joy was by far the best.

I love Bjork's vocals, the melodies are fantastic, the music is upbeat and happy, the sound is very Indie.  But, that guy.  I hate that guy's freeking stupid ass vocals that seem disjointed and stupid mixed in with the music.  It's out of place.  OF COURSE, many of you will disagree with me on this point, and I understand, feel free to tell me.  It's just my opinion that I don't like him.

Walkabout is the best, followed by Hit then Leash Called Love.  The singles, obviously.  But, I also LOVE the Carpenters cover song too, only wish it was a studio recording.

Email ThisBlogThis!Share to TwitterShare to FacebookShare to Pinterest
Labels: 1991, Bjork, Stick Around For Joy, Sugarcubes