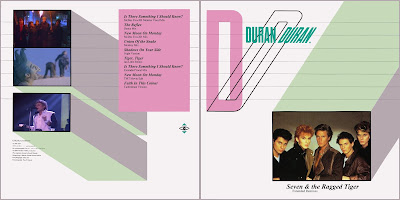 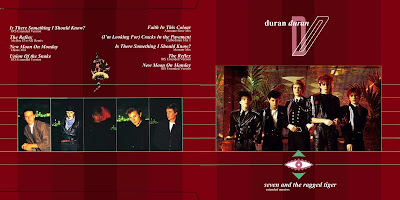 Obviously, my favorite Duran2 album is 7&tRT.  It's followed quickly by Arcadia and Big Thing, but those are for later posts.  As I said in my first remix disc for this album, New Moon on Monday was the tune that sucked me in for good.  I love this album, always will.

These discs contain not only the official remixes from the singles, but also fan-made remixes that rival the originals.  You've got McDoc Evo-XR, Ianroystone, Catbirdman and TMT, all remixers just as good as the rest.  I know that there are countless fan mixes out there, but I like to stick with the mixes that are period.  They have to sound like they were done in the same period as the originals.  No modern effects, no techno beats, no obvious darkwave synth or none of that.  The mixes have to sound like the boys made it.  These all fit the bill.

The fun part was making the covers.  The first disc is from the Video Laser Disc.  I swapped out the video graphics on the back (the originals were from Rio, Planet Earth and HLtW, I think), I cleaned up the colors, and tried my damnedest to match fonts.  The second disc is obviously the Union of the Snake picture sleeve with a promo shot of the band substituted in, then everything recolored, matched fonts again, and there you have it.

Now, all I have left to do is post the original album....   Question, though.  Does "Is There Something I Should Know?" belong with the Rio album, or would it be part of the S&tRT album?  Where does that one lonely song go????????????

Email ThisBlogThis!Share to TwitterShare to FacebookShare to Pinterest
Labels: 1983, Duran Duran, Seven and the Ragged Tiger