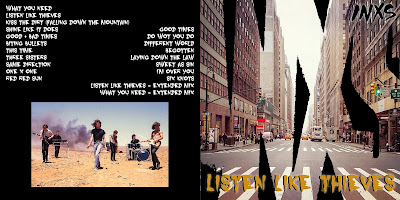 The second concert I ever went to was INXS Calling All Nations Tour.  I loved them to death, and even have romantic ties to the Kick album (previous post).  Whenever you discover a new group, it's the norm to check out their back catalog and find more great stuff to listen to.  As it is, I worked my way back to Listen Like Thieves.  I feel that this is the album where they abandoned their Punk/New Wave sound and headed straight into Rock territory.  They'd found their sound and were rolling with it.  THIS is their definitive album, not Kick.  Kick is the album that the record company and the radios promoted and pushed, but they were more than Kick, and this album proves it.

Mind you , some people will disagree with me and point to earlier work as definitive.  That's fine, there's no factual basis here, just my opinion on what I saw while growing up and reflecting back.  In my personal opinion, in fact, everything that came before this album, pretty much sucked.  I mean, the Swing?!  What a turd.

Anyway, I stuck around for X and flinched....  Then I got Welcome To Wherever You Are and said "alright, now.  that's enough..."  and that was it.  I heard Elegantly Wasted on the radio and wasn't even interested.

It's unfortunate that Michael is gone.  It's always sad to immortal artists go before their time.  Seems to be the nature of the business.

Played her straight here.  Album, b-sides and a few extended mixes to fill up the 80 minutes.  I am rather pleased with myself on that cover, though.  Totally different feel to it.  Let me know what you think