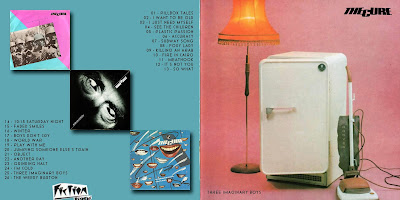 When introduced to the Cure, and listening to the Cure in the beginning, I always tended to stick with the Just Like Heaven/Let's Go To Bed/Lovecats/Inbetween Days sort of Cure songs.  Melodic and dark, lilting and poetic.  I found it hard to listen to the first three albums as they were punk and gothic, and that's not what I thought of when I thought of the Cure.  It wasn't until the mid to late nineties when I started hitting the Punk/New Wave thing pretty hard, that I finally went back and gave those three boys another shot.

This album is one of those that has always been near impossible to get in one piece.  Some versions have So What, some do not.  Others have World War, others do not.  Then you have the b-sides.  Then you have Pillbox Tales and Do the Hansa, which I don't think were actually recorded in the studio, officially for release, until the Boys Don't Cry single in 1986.  And where the hell can I find a studio recording of Heroin Face?!  So, this "era" of Cure music was a treasure trove of findings, that I still love to this day.  I wonder how Meathook would sound on stage now, or if Robert even remembers how to play it.

I did not include the first Easy Cure single as it wasn't sung by Robert.  And, I probably shouldn't have included the first four tracks, as I think those might be considered Easy Cure, and they don't quite sound like the rest of the album.  Regardless, I have it all here, Just no Cult Hero.

Who would have thought it would all start like this?  And look at him now.  Robert, please, comb your hair.