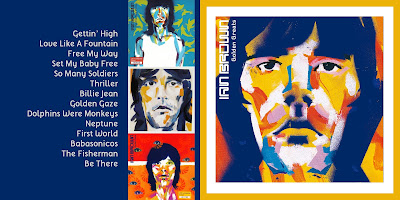 I got this one in Denver when I was out visiting my sister and her family back in 2000.  My wife and I were on vacation, and were going to travel through southern Colorado.  We got down in the red mountains and sage brush, working our way through the curves and switchbacks.  Summer heat, sun roof open on the car, sun blazing in a clear blue sky.  And this album roaring in the speakers.  Kicking ass.  From this album on, Ian Brown became one of my top godfathers of Britrock, a true elder statesman and progenitor of the genre.

And, his Michael Jackson covers are hilarious.

Only had a few b-sides.  Kept the remixes off this one, maybe a separate disc.  Dumped those awesome Jackson covers in the middle, and the others on the back end.  DON'T TURN THIS ONE OFF BEFORE YOU GET TO THE END, as I've put the awesome UNKLE song back there, which is fabulous.