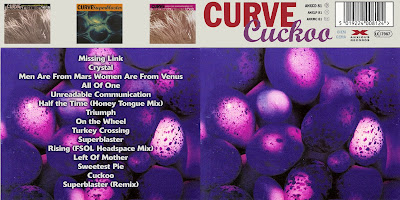 And was I ever wrong.  This album, as I listened to it once, then twice, then over and over, only got better.  To this very moment, as I type this, Superblaster is playing and I couldn't agree more with what I'm saying.  Right now, I feel that this is their best album.  Right now, if someone hadn't been Smashing Squashes or Smelling Teen Armpits, Curve might have actually been able to hit it big.  This was a total breakthrough album.

The b-sides don't seem to be b-sides, and are perfect additions to the album.  I put them in the middle, with the exception of Rising, which I set right before the album's huge 3-song send-off.  When the song Cuckoo ends, I recommend stopping the music before the SB Remix starts, and then let the album sink in and sing to your inner spirit.

The cover is the same, but I added the single sleeves.  I wish I could have put a pic of Toni on there without it being too obvious.  But, alas, I could not.  She was at maximum hotness on this album, and I wished she was my girlfriend.

I hope you love this album as much as I do.  It's in my personal top 20 albums of all time.