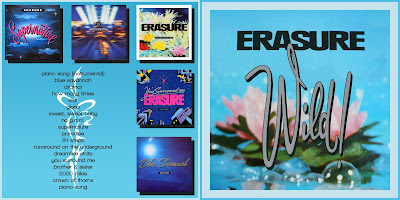 The other groups, I had been familiar with, as I had all of their albums and followed them voraciously.  Erasure on the other hand, I knew Chains of Love and A Little Respect, but that was it.  I knew nothing of the Vince connection to DM, hadn't heard any of their other songs, owned none of their albums.

It started with that album along with the quick purchases of Drama and Blue Savannah.   Wonderful.  The ACTUAL singles, especially the imports were nearly impossible to locate, and without the internet, the regular 7-inch single mixes of Supernature, Runaround On the Underground, and Dreamlike State didn't happen until well into the 21st century.

I love all of the single sleeves.  They're all very pretty.  That's why I felt compelled to use the Drama 7-inch sleeve for the album this time.  I have TWO remix discs yet to post, and those will have variations of the Supernature Maxi-Single sleeve.  I will be posting those later this summer....