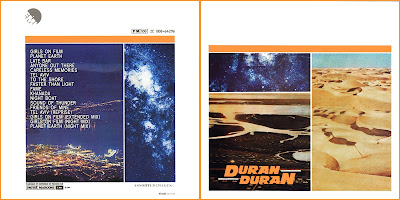 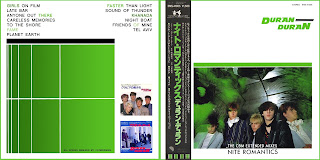 I've said before that I didn't get into D2 until New Moon came out.  And then, I was only able to recognize enough to focus on Reflex.  So by the time I was really hard core into following them, Wild Boys was just being released.

This leaves a full two albums of materiel plus that much more mixed to be heard.  At the time, and to a degree now, it is difficult to go backwards when listening to a band.  Whatever I am currently listening to, I always want to hear what's next.  Same with D2.  It took a summer afternoon on the beach of Lake Michigan in Chicago, with a group of young girls and their boombox listening to Girls on Film and Planet Earth to help me go back and listen to the first album.  ( I think it was the beauty of the nubile young women that encouraged me to go back and listen, but who knows - yeah, right.)

Forever, I thought that Is There Something I Should Know was actually supposed to be on the first album.  It always seemed out of place.  Years later, I find out it replaced To the Shore.  Then I find the singles with Late Bar, Khanada, Faster Than Light and Fame.  What the hell.  That's five songs.  That's an EP.  And there were only nine songs on the album to begin with!  SO, there I am with my duel deck cassette player, and my turntable and my blank tapes, trying to make a mix of the album with the b-sides and the two mixes that I knew of.  And no cover (no computer) to wrap it in.  Just my Bic and my colored markers to make the spine look pretty.

I always like the cover to the Planet Earth single, the 7-inch release more than the 12-inch.  It was orange, my favorite color, and I liked the contrasting city and desert.  Also, the Nite Romantics sleeve is one that I still have hanging on my wall in a frame.  Absolutely classic.  Except, my Obi strip is ripped and taped.  Other than that, I love having it.  I think I still have enough mixes that I might make one more mix disc using the blue and red japanese sleeve for Planet Earth, because that's my next favorite, despite the fact it breaks from the Assorted Images motif they had on the rest of the releases from the album.

On the "Master Disc" I kept the album generally in the order it was released, but I mixed the b-sides in throughout, rather than just dumping them all in the middle. I also added the original Tel Aviv in the middle to balance the album closing.  I think I did a pretty good job of arranging, let me know if you like it.

The Extended Disc is the Catbirdman mixes that rock, of course.  You'll love every mix, he did a stellar job.