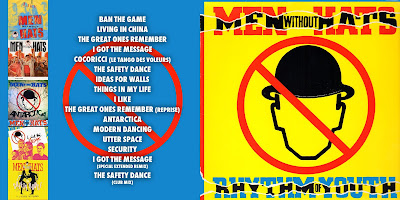 Probably the 4th or 5th 45-rpm record I purchased.  I can't remember exactly, now, as I had Rockwell's Somebody's Watching Me and Toni Basil's Mickey in there, somewhere, too.  The Safety Dance has long been one of my all-time favorites of the era.  I remember exactly the first time I heard it.  It wasn't on the radio or MTV, but two of the popular girls - Tricia Young and Lauri Olmstead - were singing it out on the playground while we were at recess in 5th or 6th grade elementary.  I was fascinated.  It wasn't long after that and I saw the video on MTV, and heard it then on the radio, and I knew I had to get it.

I didn't really get into the album until after I had graduated from High School and began exploring music in general.  I used to go to used record stores constantly, looking for new stuff to buy.  That's when I got this album.  Obviously, it's a great album with a lot of great singles.

I know that a lot of 80s compilation albums use the extended mix of the song, as well as radio stations playing their 80s hour shows.  I personally prefer the single version, that starts right into the song full-bore.  Just like on the video.  I also think the best song on the album, and a key track for any 80s mixes I might make, is I Got the Message.  Best song.

Had fun with the cover.  Half tempted to get a tattoo of their circle strike logo.  Wouldn't that be cool?

Email ThisBlogThis!Share to TwitterShare to FacebookShare to Pinterest
Labels: 1982, Men Without Hats, Rhythm Of Youth