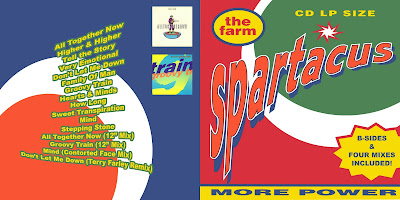 When the glut of Madchester bands came out in the late 80s and early 90s, I always felt that the Farm was one of the few bands that stood out among the rest.  Their early work helped to push them to the top, and this album is probably the culmination of their endeavors.  Their next couple albums before they finally called it quits were really quite terrible.  Too bad.

These guys aren't in my "top bands" list, but they are necessary to grasp the breadth of the Madchester movement.  To not at least mention them would be wrong.  So I offer this one up as another hole to plug in your collection, if you don't already have it.

Nothing more to say here, other than the mixes are great, and the cover of Stepping Stone is a lot of fun.

I'll see you tomorrow with the Happy Mondays...

Email ThisBlogThis!Share to TwitterShare to FacebookShare to Pinterest
Labels: 1991, Farm, Spartacus, The Farm