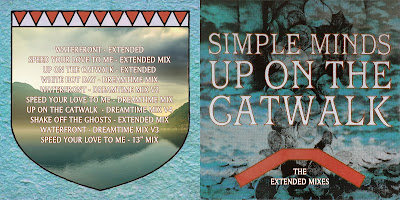 When I was younger, it took me a while to listen to, appreciate and learn more about the Simple Minds.  Being a somewhat typical child of the 80s (maybe), I was eternally hooked on Once Upon A Time and Don't You Forget About Me.  I couldn't bring myself to bother with anything else they did.  Money was limited, and we didn't have the internet, so in order to listen to a band's older material like SM, you had to buy it.  Well, part-time McDonalds work didn't pay that much.  So, I stuck with what I had.

Years later, as the internet exploded and music became a nearly free commodity, I started listening to a lot more bands that I hadn't previously, like SM.

With an affinity for Once Upon A Time, I was naturally drawn to the sound of Sparkle In the Rain.  A beautiful album that I feel is what brought the band to the attention of the mainstream music market.  My absolute favorite was Up On the Catwalk.  The keyboard measures in the chorus are my favorite part.  I sometimes have to bust out my air keyboard and play along.

Email ThisBlogThis!Share to TwitterShare to FacebookShare to Pinterest
Labels: 1983, Simple Minds, Sparkle In the Rain