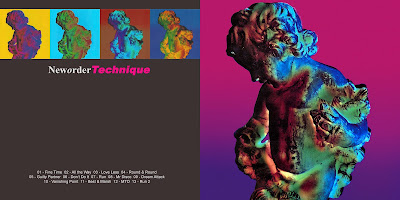 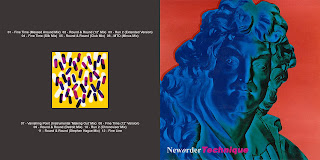 And now, the first of four posts leading into this weekend when I will be out of town.  Over the next four days, I will give you some primo albums for your permanent library.  No true Post Punk fan would be without them!!!

For some reason, I was fully aware of when Technique was going to come out.  I remember getting the cassette at the record store after school the day it came out.  I had a friend named Ed, and he and I drove around in sub-zero January temperatures in my car listening to this one.  From the very first note, I knew it was a classic.  This album represented the final half of my junior year in High School, and it also was the first major album release for me after my move from Chicago to the Midwest.

I've heard a lot of discussion of how the first half of the album is traditional Post Punk, and then how the second half drifts into proto-House music, and I can get that.  I do prefer the first half, as it's sound was more of a soul-caress for me, while the second half was more dancey and not really the mood I preferred at the time.  Saying that, I still consider the entire album to be a masterpiece beyond compare.  With the single remixes added, it even makes the second half more cohesive with the overall picture.

I liked the b-sides with the exception of Best In Marsh, which I just don't get.  That one track stands out like a greasy turd amongst the rest of the songs.  It was a pure throwaway phone-it-in track, but I still included it.  I'm pretty sure I got all of the mixes on here, might have missed one or two, but I don't think so.  I even got the wonderful Chronovisor mix of Run 2 on there as well.  What a great mix!

Most of you probably have all of these already, and that's fine.  But, now you have some nifty new covers and a awesome arrangement to boot.  For those who don't have this, what the hell are you thinking?!