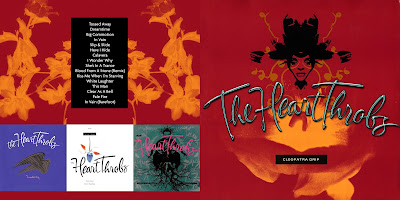 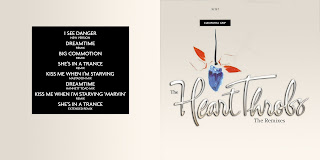 I bought the Heart Throbs at the same time I bought Pixies' Bossanova.  It took me a while to get on board, as I was hooked on Bossanova at the time over Cleopatra Grip.  But, as time went by, I found them to be a classic Post Punk band that fell somewhere in between Lush and REM.  Don't know why I felt that.

I didn't have access to any of the singles at the time, it took me about 8 years to finally get all of them (pre-internet), but by then, they had released 2 more albums and an EP, and then broke up.  It was still fun to piece together all the tracks from that specific session, and listen to them as one.  I still pull this one out every once in a while, along with their second album Jubilee Twist (which I will post at a later date).  Their EP after that was meh, a rehash of the previous two albums, and their 3rd album, Vertical Smile (what sort of innuendo is that?!) was really terrible.  They had lost their magic.

The covers of the first two albums and singles were done by ME Company, the same outfit behind the Shamen, Sugarcubes and Bjork covers, to name a few.  Beautiful covers and wonderful typography.  I had fun enhancing their logo for the covers, but I left the album graphic alone.  Pretty pretty.

I added an extra track to the Remix album at the last minute.  It's called Arcadia Toss and it's a medley of two of the album tracks, and then remixed.  I don't like it at all.  I don't like the mix or even the remix.  The tracks are two separate songs, in my view.  BUT, I plugged it in the zip in case you want it, even though I didn't put it on the Remix Sleeve.  You can do what you want with it.