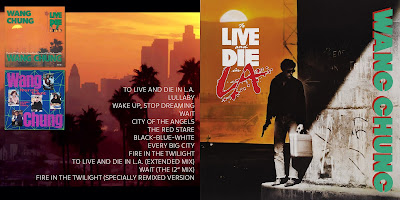 Obviously, Wang Chung was more successful once New Wave started to die down.  I love how they took New Romantic sensebilities and crafted them into mainstream Pop Rock that was radio friendly.  They took something bland and gave it an attractive edge.  Couple this with their extensive musical background and education, and it's probably why they got the shot to do this soundtrack.

As a whole, the album isn't that bad.  It's a "pleasant" listen that is executed well, with a couple memorable melodies intertwined.  I remember when this movie came out, and being just a kid, it never really interested me to go see it.  I was more into the Goonies, and Ghost Busters and James Bond of the time.  You know, Spies Like Us.  But, the song was played on the radio a lot, and this is how I was first introduced to the band.

Too young to know any better, all I had was the 45rpm single of the song until I picked up the Soundtrack on CD in the late 90s.  Glad I did.

I added Fire In the Twilight, another soundtrack song, as it came out at the same time, and doesn't really fit anywhere else.  It sounds alright here.  Also added the mixes, of course.

I couldn't find the right font to match the Wang Chung logo, so I used the next best one similar.  It's not quite the same, but close enough.  Also, used the original movie poster for the cover, to dress it up a bit.


Chung on your wang tonight
Posted by Unknown at 4:05 PM

Email ThisBlogThis!Share to TwitterShare to FacebookShare to Pinterest
Labels: 1985, To Live & Die In LA, Wang Chung