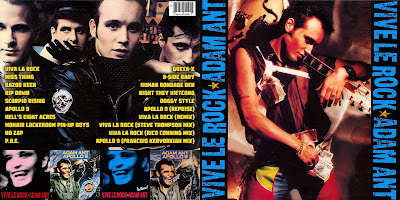 All through my youth, I was always a fan of Adam Ant, even when he was solo (because that's where my earliest memories start) but more when he was with the Ants.  I think that when he split the band, he freed himself to be more creative and take an even greater leadership role.  Even when he spun away from his Punk/New Wave roots and ventured into 80s pop, he was still a spectacular musician.

One of the aspects that I admired about Ant, was his ability to exude hetero sensuality and eroticism while NOT being some typical masculine testosterone tough guy, but more of a pretty boy.  He showed that even those guys with skinny arms and lace scarves could be just as attractive to the opposite sex as a long-haired headbanger.

Vive Le Rock finds Ant moving more into the Pop Rock territory, with a couple big hits that I remember well.  I had these two songs in a mix tape I made from taping the radio.  I always loved those tapes, even with the beginning and ends of the songs all jacked up with a song segue or the DJ jumping in and shooting his mouth off.  These two singles I remember being that way specifically, but that was how I listened to them for years.  I remember the end of Apollo 9, the DJ said "Traffic on the Dan (Ryan Expressway (a highway in Chicago))" before I cut the tape off.  Now when I listen to the song, right at the end of the song I say "Traffic on the Dan" right where it was when I was a kid.

B-sides, demos and mixes galore on this one.  A great little spin.  I changed the color of the type on the front to blue, as I felt it suited the cover better.  The cover was too red before.  The blue provides a nice contrast with the brown, red, orange and yellow of the photo.