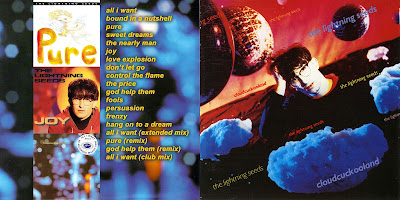 My first experience with Ian Broudie was with this album during my Senior year in High School.  One of my buddies had purchased this album because of All I Want on the radio.  But, once he listened to it, he didn't like it, so he offered to sell it to me for $1.00.  I was building my collection of music, so anything new I could find was great, and I figured I didn't have anything to lose for a dollar.  It was a cassette, and he had busted the case, but I bought it anyway.

The album is full of Broudie magic and fun to listen to.  The first seven songs are all great, and the rest of the album is pretty good.  The b-sides are nice, and even the mixes aren't bad.  The cover of Hang On To A Dream is even better than The Nice's version (but not as good as Tim Hardin's).

One thing that always bugged me, is that Broudie COULD be a good looking guy.  BUT, he wears those goofy glasses with that hairdo and his big nose.  Mind you, I have a big nose, but I do things to keep it from being the detractor of my face.  He seems to highlight his.  I know that he may be making a statement about how he doesn't care about what people think of his looks, and that's fine.  More power to him.  But, that doesn't make it any easier to look at him.  Call me a hater, but I think he needs a personal makeover...

It doesn't make him any less talented, though, and that's the key.