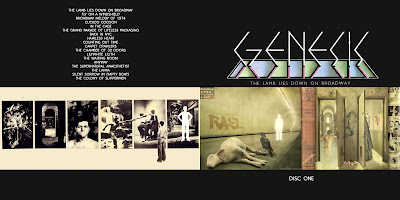 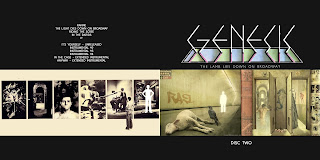 To quote John Cleese....  "And now for something completely different!"

When I purchased Peter Gabriel's So album back in 86 or 87, I became obsessive of anything and everything that PG ever did.  Once I discovered that he was in Genesis, I was told that this would be the album to get.

Being a 16 year old boy, I popped my tape player on and put my headphones on and sat back on my bed with the latest issue of X-Factor (original X-Men).  I listened to the first song, then the second, and by the third, I pulled my headphones off and stared at them with a frown.  What the fuck was this?  This oldies sounding shit?  What the hell?  I thought I had made a big mistake.  I had purchased it with my first check from my first job at McDonalds, and I felt I had wasted my money.  I was sad and mad and ready to throw the double-cassette set in the garbage.  But, I didn't, and I put the tapes in my collection and moved on.

So was my first exposure to Progressive Rock.

Later on, I pulled it out, probably a month or so later, and tried it again.  I made it through the first tape,  but couldn't put in the second.  The third time I tried, I listened to the entire double-cassette from beginning to end, and then again, and I haven't turned back since.

This album is utterly fantastic.  What makes it fantastic isn't so much the melodies or instrumental performance, but the lyrics.  This album is a story about a man named Rael.  What happens in the story is near impossible to try and describe here, but I can tell you that it is intriguing, creative and surreal.  There's a host of characters that include the likes of the Carpet Crawlers, the Lamia, the Slippermen, Lilywhite Lillith, Brother John and, of course, the Lamb.  There's a factory that packages people up, a parade down broadway that includes cyanide wands, a race down some rapids, flys being smashed, a chamber with 32 doors, and a host of other concepts that are mindblowing.


"They say she comes on a pale horse, but I'm sure I hear a train.  Oh boy!  I don't even feel no pain! I guess I must be driving myself insane... Damn It All."

One time I got ripped and listened to the album and I swore I was going to write a Vertigo comic book about Rael.

When people talk about story albums, they tend to talk about Tommy or The Wall.  Very rarely do people mention The Lamb.  That's unfortunate, because I myself find it to be more interesting than either of those other two.  Music-wise, yes, The Wall is better, but I feel that The Lamb is way better than Tommy.

PG pulls off a stellar creative performance, as does the rest of the band.  Phil does a great job on vocals, as he does, on several of the songs and his percussion is traditional Collins.  He's great.   Rutherford and Banks are good too, I would assume, as I've never followed them individually.  Together, the team does a wonderful job.

This is probably the first album that I've posted that dramatically breaks from the 200+ albums that I've posted so far.  If you like what I've posted, and if I've introduced you to groups you haven't tried before, then have some faith here.  It's a good album, you'll like it if you keep an open mind about music as a whole.
If you have issues with it, just wait until Mainstream Pop Week, the first week in September, and Hard Rock/Heavy Metal Week the first week in October.  That ought to loosen your testicles a bit.

Email ThisBlogThis!Share to TwitterShare to FacebookShare to Pinterest
Labels: 1974, Genesis, The Lamb Lies Down On Broadway