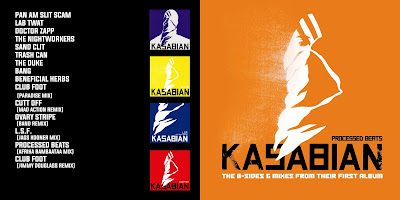 Finally back for the week, but there will be another break next weekend, so we have to pack a lot in while we can!

Kasabian was one of the groups that was part of the 2004 Indie Britrock Insurgence.  2004-2006 so a slew of new bands from the British Isles that were fantastic.  I had an affinity for Kasabian as they sounded so much different than the rest.  They were great.  My favorite track was LSF, but there were many songs that played often in my stereo.

Here, I've included all of the b-sides from the first album, along with my favorite mixes to make a special little companion disc to the album.  I may later make a remix disc to include the rest of the mixes for a complete set.

If you have limited space for your CD collection, or it has grown too massive, it is awesome to be able to consolidate tracks into sets like this and put them into a slimline jewel case.  You can take what was once 3 inches of shelf space and reduce it down to less than an inch.  Great stuff.....

Email ThisBlogThis!Share to TwitterShare to FacebookShare to Pinterest
Labels: 2004, Kasabian