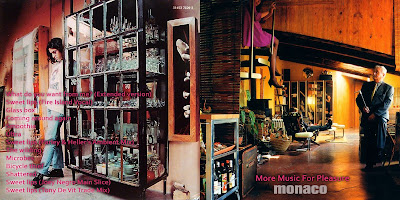 It was a cold and blistery winter night when I first heard WDYWFM? play on my radio in the car.  I had just gotten off work and it was 11 or 12 at night, and the temperature was about 4 degrees.  I huddled in my driver's seat waiting for the car to warm, and looking out at 12 inches of plowed snow and ice in the parking lot in front of me.  The sky was jet black, and 3 or 4 light poles were lighting the empty lot full of lines and tracks created by the snow plows.  I had the radio on, and they announced Monaco, and the title, and it started playing.  At the time, the internet was still in it's infancy, and I had no idea who Monaco was.  But, they sounded just like NO, and this guy singing, sounded a hell of a lot like Barney.

I consider Monaco a classic for Hook.  Revenge was good, but it was rough and hard, and raw.  Monaco had a more classic refined sound that seemed to me to be a mature NO.  It blended the sound of Britrock of that time with the best of what NO was.  It abandoned the crap that was Republic and returned them to Technique, while pulling it forward to the modern sound of 1997.  This was no rehash, it was new and it was fantastic.  THIS album should have been Republic.  Republic was just a tired Electronic album that needed Neil Tennant singing instead of Sumner.

The follow up to this album didn't come out for another three years or so, and it wasn't anything spectacular, but it was good.  If Monaco had continued, I feel I would have a greater respect for Hook now.  I don't care for what he's doing with the Light, Monaco was the route he should have followed.

I was tempted to use the naked guy for the cover, but settled on this, it looks pretty good.  I've got all the b-sides and non-album tracks, and I think I have all of the mixes, but I'm not sure.  It is a great companion to Music For Pleasure, and a sound of Hooky I will never forget.