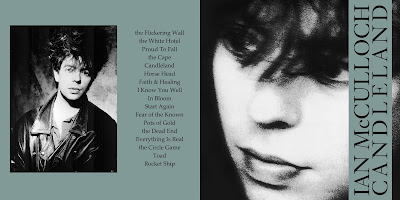 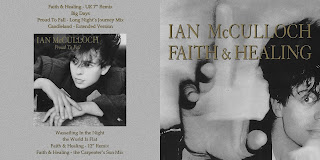 I was saddened when Ian left the Bunnymen, but glad that he was going to try his own thing.  Unfortunately, the next Bunnymen release was pretty lousy, as the vocalist wasn't near as talented as Ian.  On the same token, Ian's solo work was good, but a little dry, a tad blah. His singles were great, as were the mixes, but as a whole the album needed something more.

One of my favorite parts was Elizabeth Frazier's guest vocals on Candleland.  Although I prefer her singing by herself, she sounded great singing her duet with Ian.  A great track.

Another great thing about this album is that at the time it offered a definite British alternative to Madchester.  It was hard to find a British band or performer at that time who wasn't trying to emulate the Madchester sound.  Ian, like Morrissey, stuck with the style that he did best, and it paid off.

Like Bona Drag, Technique, Violator, and Disintegration, Candleland was part of the final closing of 80s Post Punk, one of my favorite eras in modern music.  All of the artists who made those final albums of the 80s continued on after well into the future and all the way to today, but it has never been the same since.  What a glorious time.

There were too many b-sides and non-album tracks to put them on one disc, but not enough for two.  So, I made an expanded Candleland album, and a Faith & Healing EP to accompany.  Let me know if I've missed anything.