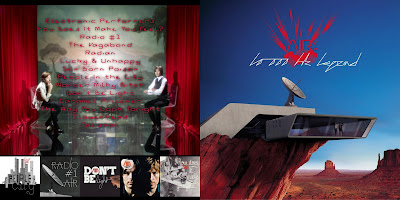 AIR, an acronym for Amour Imagination Rêve (Love Imagination Dream) is two men from France who got together in 1995.  I didn't hear of them until well after they had released Moon Safari, an album that I really liked.  I went and saw the movie Virgin Suicides specifically because of their soundtrack.  I thought they were great, a nice jazzy, laidback band with a retro feel.

The best tracks are Electronic Performers, How Does It Make You Feel?, Radio #1, People In the City and Don't Be Light.  I put the b-sides on here, but no mixes, as the mixers couldn't capture the vision that the band had, and it normalized the tracks and made them bland and shitty.

The albums since this one have been good, but this one was the best.  Nothing can compare to it.  It's a journey through a twisted robotic brain on acid.

I got this album shortly after my first son was born.  I was working at this hellhole steak house with a regional manager that was Satan incarnate.  If anyone knows Brandon Heinsen, let him know he's a fucking douchebag.  This album helped me escape the horror that was my life at the time, as I was also suffering from severe depression at the time.  It was almost like the album was how I was feeling.  It was a time that I never want to go back to, but this album was one of the few from that moment in my life that I can still listen to (Can't hack Cure's Bloodflowers anymore.)  I have to thank my wife for sticking by me at that time.  I really put her through a lot of stress.  She's a gem...