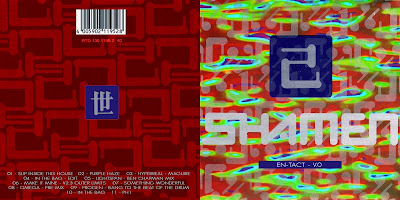 As an obsessive compulsive, being a Shamen fan can be difficult.  Mostly because there are so many different versions and mixes of their songs.  But, with En-Tact, my problem was compounded by the fact that there were a bunch of non-album tracks as well.  Good thing is, I was able to make En-Tact V.0.

I wanted to try and capture some of the sound that they had from their first few albums, that got lost when En-Tact came out.  I pulled all of the earliest versions of the singles from En-Tact that I could find. Plus, we have a host of non-album tracks that obviously sound pre-Tact.  A definite Indie-electro sorta sound.

Purple Haze is an interesting cover, In the Bag and Something Wonderful are great, and the rest of the non-album tracks are pretty good as well.  Omega Amigo mix is an awesome rendition, as is Ben Chapman's Lightspan.

Definitely a glimpse of a group on the verge of exploding onto the British music scene, this one makes a great transition from the pre-Tact albums to the post-Tact.  A nice little set to wrap it all up.

Email ThisBlogThis!Share to TwitterShare to FacebookShare to Pinterest
Labels: 1991, Shamen