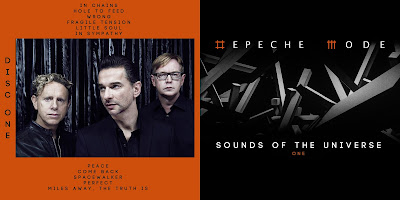 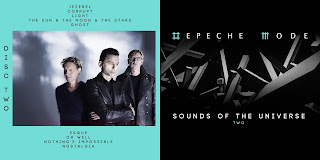 I think that the last good album DM released was Ultra.  In this new millennium, they just haven't been able to pull a good one out, telling me that they've outlived their usefulness and ideas.  Honestly, it's a sad thing when VNV Nation and De-Vision sound more like Depeche Mode than Depeche Mode does.

This album, though, was an interesting listen, with equally interesting b-sides to boot.  It showed maturity and growth, and was an album written to represent the ages of the men performing them.  I found it almost sad, remembering the days when I was young and going ape-shit over any new material that they released, and knowing that as I grow older, so do all of my idols and rock gods.

On that note, it behooves me to say that if a group wants to remain relevant, distinguished and at least respected, they need to write music that represents their ages.  Let your sound mature as you do.  Some examples...

Performers whose music has not matured, and does NOT represent the artists' age -
Duran Duran
Cure
New Order
Depeche Mode

What's funny (not in a hahaha way) is that the four groups I put in the stagnant non-growth immature category are my top four groups as it is.  In fact, 1, 2, 3, 4 in order, just like that.

I think that this is DM's last good album.  It should have been their swan song.  It's unfortunate that it wasn't.  They've tortured us with one more stale, agonizingly dull album.  As it is, maybe they aren't done yet.  There's always hope for one more...

The entire album, the b-sides, and Gahan's guest vocal on Nostalgia.  Probably my favorite non-DM song by Gahan.  Maybe I'll do the remixes later, not sure, none of them were very good anyway...

Email ThisBlogThis!Share to TwitterShare to FacebookShare to Pinterest
Labels: 2009, Depeche Mode, Sounds of the Universe