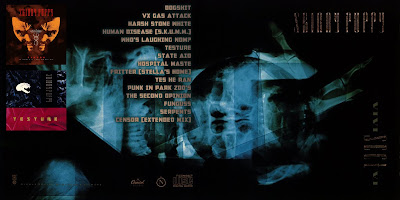 Skinny Puppy's VIVIsect VI was the very first Industrial album I ever purchased.  I remember walking into Twister's Records in  East Park Mall next to the food court, and the blond-headed punk running the counter was playing it.  I was fascinated by it.  I had never heard music like it before, and it was GREAT.  It reflected the mood I had then, having moved from Chicago to a state buried in the middle of the US.  It was angry, dark, and a little scary.

It's surprising to listen to, when the two opening tracks actually sound like they have pop hooks in them,  they were actually catchy sounding.  They opened the album strong, and followed it with Harsh Stone White, an incredible ballad.  They sample Evil Dead II in Who's Laughing Now? and the second single, Testure follows it with another somewhat radio friendly sound.  I even heard it on the college station in town, so it couldn't be that bad.  State Aid and Fritter are my two favorite tracks on "Side 2", though.  State Aid is a constant slamming barrage of rhythm and screaming, while Fritter is a horror movie soundtrack.  Tasty.

I have all the b-sides here, they're pretty abstract, but still interesting.  I added the mix of Dogshit, entitled Censor, but I was unable to fit any of the Testure mixes, which makes me a little disappointed.  I may add a disc later of SP mixes from several albums, because they're all in that shape.

The cover's the same, cuz it's beautiful.  Another Gilmore classic!  I do like the cover of Testure, too, so maybe if I make that remix disc, I'll use that one.  Anyway....