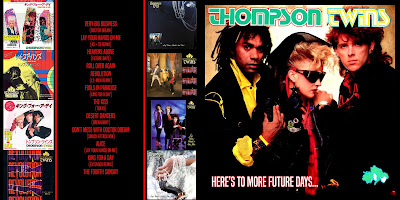 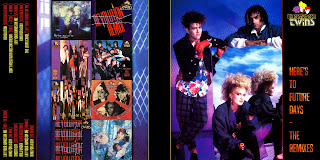 My favorite, and probably the best of the Thompson Twins albums, Here's To Future Days came out in 1985.  This was the last of the great New Romantic albums.  As we shifted into the late 80s, the sound began to change as we saw Rap, Hair Metal, Synth-Pop/Rock, Post Punk and proto-House began to dominate the music scene.  The Twins reached the peak of their popularity with this album, and then it was a slow slide downhill after.

I think my favorite video from this album was the Revolution video.  From what I can remember, it was a pseudo-live performance, and was shot from the floor up.  They were bouncing all over the stage windmilling their guitars and screaming out the song and they were bigger than life.  Yeah, it was a good video.  Trying to find any of the official videos from this album is near impossible.  I haven't seen the Revolution video for 25 or 30 years.  It would be great to see it again.

As with Into the Gap and Out of the Gap, This album had a ton of mixes.  Again, more than I could count.  I know I didn't get all of them, as there were some that seemed redundant and I didn't have enough to fill an entire additional disc.  As it is, there are two solid discs of great mixes and versions.  They also had a bunch of good single sleeves, as well.  I was lucky to find such a great scan of a magazine article that had the trio and logo in front of a yellow screen.  It's a perfect cover.

Now, I liked Close To the Bone, but that album signaled their inevitable slide into obscurity.  So sad.  By the time Big Trash and Queer came out, they were irrelevant and had to re-invent themselves into Babble.  When I hear the name Thompson Twins, though, this is the album that instantly comes to mind.