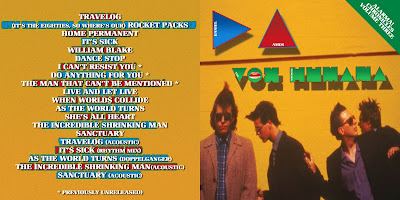 Of all the posts I've made this last week, this one is probably my favorite.  I was introduced to Daniel Amos in 1985 by a guy named Loren who I used to be friends with when I was a kid, and then he moved to St Louis.  At the time, I was struggling to find myself in Junior High, being a nerd and all.  I was in to Duran2 like nobody's business and reading comic books like they were going out of style.  This album (and the one before it - Doppelganger) seemed to fit my personality to a tee.  (Did you notice I used three different cliche sayings in the last two sentences?)

This album is Part III of a IV part series by DA called Alarma!  I posted Doppelganger several months ago which was Part II.  Part I and IV aren't as good as the middle two, but I will eventually post them.

The sound, as the previous albums, is something of a cross between New Wave and Classic Rock.  The vocals at times remind me of the Beatles, but the melodies themselves are very unique, and I can't compare them at all to any other groups that I can think of.  Whereas the the previous album was somewhat stark, this one is full and lush.  All of the songs jump from genre to genre, every song different from the one before.  Some of them are written and performed smoothly and elegantly, others are stilted and awkward, purposefully.

The best songs, in order of the track listing, are Travelog, William Blake, Live and Let Live, As the World Turns and Sanctuary.

One of the best tracks for nostalgia's sake, is (It's the Eighties) Where's Our Rocket Packs?  It's funny that they were expecting so much back in the eighties, and here it is, 35 years later, and only half of the things they sing about are even close to coming to fruition.

The album was recently re-released with some demos, alternate tracks, and outtakes.  So, I picked the best of them and put them on.  The acoustic versions are fabulous, and I dropped the new outtakes right between "Side A" and "Side B".

I really think if you give this a try, you'll fall in love with it as I have.  It's really that good....